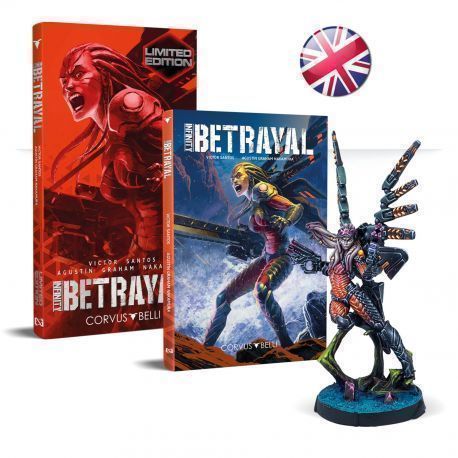 This limited edition includes an exclusive figure of Ko Dali, the main character in Infinity: Betrayal.

On a hidden base in the midst of the jungles of the planet Paradiso, Imperial Agent Adil Mehmut must determine whether his prisoner, Special Operative Ko Dali, once a true heroine, is a traitor to her country and the entire human race, or a alien who has supplanted her appearance and identity to divide the forces of humanity.
A tour de force between the two that will turn into a race against the clock before the alien forces of the Combined Army manage to discover Ko Dali's whereabouts and try to rescue her.
In this history of political and military intrigue, where nothing is what it seems, Adil will test the loyalties of her companions ... and of the very nation she has sworn to serve.

Have you devoured the Infinity background books and want to know more? Don't worry, this year you can satisfy your craving for knowledge thanks to Betrayal, Infinity's graphic novel, a volume full of adventure, emotion, charismatic characters and much, much Infinity. A graphic novel that will allow you to know and see more of the Human Sphere and the Infinity Universe