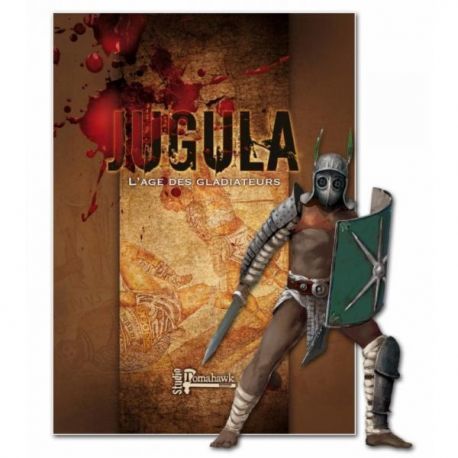 Jugula is an exciting miniatures game that recreates the fierce and bloody gladiator combats of Ancient Rome. Using a simple and intuitive system based on the use of Jugula cards, the players are invited to take the role of a Lanistae in charge of their familia of gladiators, confronted by a vast array of tactical decisions that will determine their victory in the arena. Jugula also offers a complete campaign system for players to manage their ludus (gladiator school) from its start in fetid underground arenas through to the glory of the Coliseum, where you will proudly see your men fight and die under the watchful eye of the Emperor! Fame and fortune awaits at the end of the road, but other Lanistae will stand in your way. In this book you will find the arena combat rules and the career campaign rules plus a poster depicting an arena over which your gladiators can fight. 60 pages, full colour, soft-back. Contains separate 39cm x 39cm paper playing arena. Remember, each player will need their own JUGULA deck.