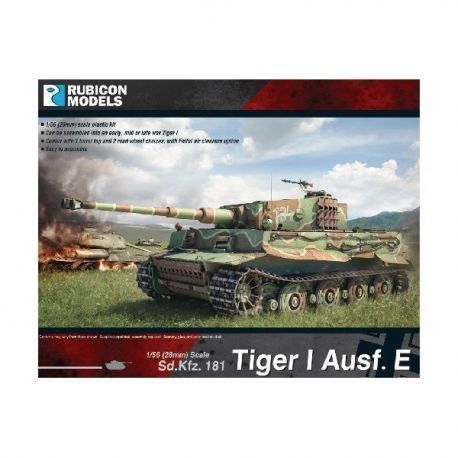 Tiger I (designated as Sd.Kfz. 181) is the common name of a German heavy tank developed in 1942 and used in World War II. The official German designation was Panzerkampfwagen VI Tiger Ausf.E, often shortened to Tiger.

It was an answer to the unexpectedly impressive Soviet armour encountered in the initial months of the Axis invasion of the Soviet Union, particularly the T-34 and the KV-1. The Tiger I gave the Wehrmacht its first tank mounting the 88mm gun in its first armoured fighting vehicle-dedicated version: the KwK 36. During the course of the war, the Tiger I saw combat on all German battlefronts. It was usually deployed in independent tank battalions, which proved to be quite formidable. While the Tiger I was feared by many of its opponents, it was over-engineered, using expensive materials and labour intensive production methods. Only 1,347 were built between August 1942 and August 1944. The Tiger was prone to certain types of track failures and immobilizations, and limited in range by its high fuel consumption. It was expensive to maintain, but generally mechanically reliable. It was also difficult to transport, and vulnerable to immobilization when mud, ice and snow froze between its overlapping and interleaved road wheels in winter weather conditions, often jamming them solid. In 1944, production was phased out in favour of the Tiger II. With this model kit, you can build all three (early, mid, and late war) versions of the Tiger I tank. It comes with three turret tops, optional Feifel air cleaners, and two different sets of road wheels. Number of Parts: 68 pieces / 4 sprues