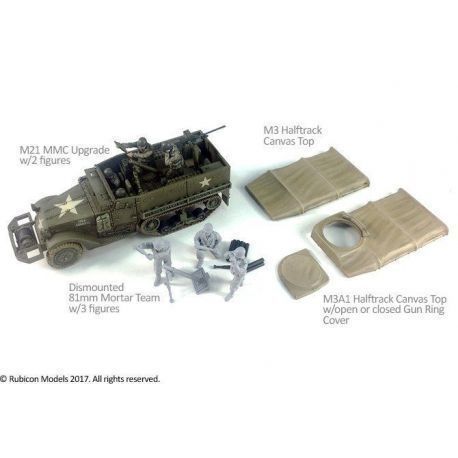 The M21 Mortar Motor Carriage (MMC) was a self-propelled artillery mount on a half-track chassis used by the United States Army during WW2.

It was equipped with an 81mm M1 mortar and an air-cooled M2 Browning machine gun. It was produced by the White Motor Company in 1944. Only 110 were produced. The M21 served on the Western Front, seeing action in Normandy and in southern France, before later being used during the Battle of the Bulge, the Battle of Belgium, Operation Market Garden, and the invasion of Germany from the west. The M21 served with the US 3rd, 1st, and 7th Armies during the campaign in France, and the 2nd Armored Division, which developed it. In addition, 57 units were leased to Free French forces. By 1945, it was declared obsolete, due to the insufficient power of the 81mm mortar as an artillery piece. Standard US tank and armoured infantry battalions had a mortar platoon equipped with either M21s or the older M4 MMCs. The M21 was used mainly to illuminate targets at night or provide indirect fire support to the infantry. EXPANSION KIT ONLY REQUIRES M3/M3A1 HALFTRACK (280027) BASE KIT TO COMPLETE FULL MODEL Product Highlights: - Conversion set for M3/M3A1 Halftrack (280027) - Includes tarpaulin for both M3 and M3A1 halftrack - Highly detailed interior for the M21 MMC - Standalone mortar team included - Total of 5 US infantrymen