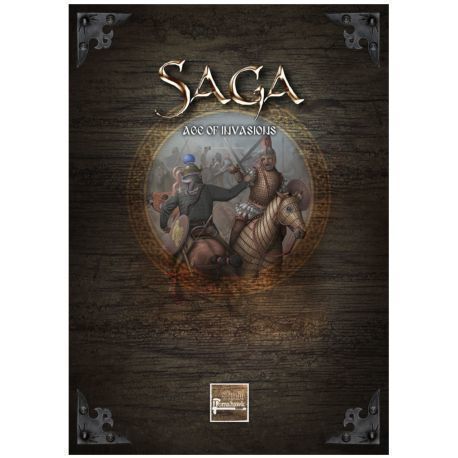 SAGA Age of Invasions is a SAGA supplement which covers the era of the Great Invasions that ended in 476 AD when the last Roman emperor was dethroned.

Divided between East and West since 395, the Roman Empire was under pressure from the so-called “barbarian” peoples: Goths, Germans, Persians, Huns and many others. The threats were many.
This little-known period has left its marks in our collective imagination, none greater than Arthur, the British chieftain who literary tradition raised to the rank of legendary king. It also knew its fair share of skilled generals and intrepid chiefs. In these pages, you’ll come to know the brilliant Aetius, the fiery Clovis, and the terrifying Attila.

A copy of the SRB20 SAGA Rulebook is necessary to use this supplement. This book is accompanied by eight Battle Boards, which may not be sold separately.