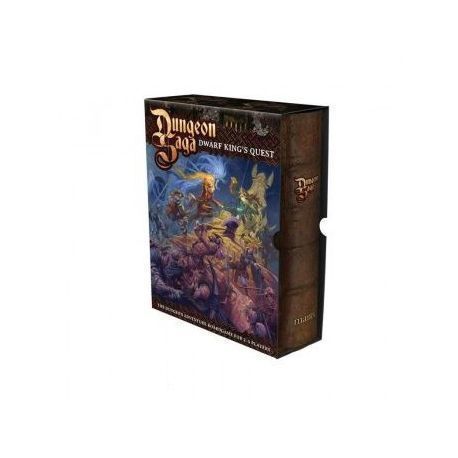 Over a thousand years ago, Valandor, the greatest known hero, fell in battle - fighting to protect the lives of those around him. From shore to shore, all owe thanks to his wondrous legacy. Now, sacred sites across the land have been defiled by the disgraced wizard Mortibris, who along with his vile undead minions will stop at nothing to obtain the secrets of Valandor?s power. Only the bravest heroes dare oppose him. Thrown together from the far corners of the realm, they step boldly into the depths, ready to face whatever foul evil awaits them? Hero, your Quest begins here! Embark on a fantasy adventure for up to 5 players in the Dungeon Saga board game! With highly detailed game-pieces and learn-as-you-play rules, this set contains everything you need to transform your table-top into a magical world of heroes and monsters. Play a single game in just 30 minutes, or combine the carefully composed adventures for countless hours of classic quest gameplay. When the fate of the world hangs in the balance, which part will you play in the epic Dungeon Saga? Content: 26 Hard Plastic Models 22 Scenery Components 10 Doors 50 Clear Plastic Clips 1 Rulebook 1 Getting Started Guide 1 Scenario Book Cards Counters Stat Cards Double Sided Tiles