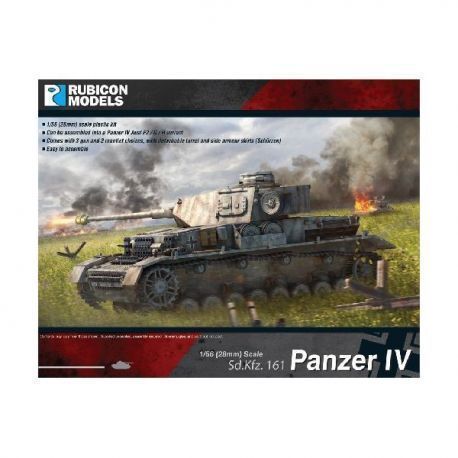 Panzer IV (designated as Sd.Kfz. 161) was a German medium tank developed in the late 1930s and used extensively during the Second World War.

Este producto ya no está disponible

Designed as an infantry-support tank, the Panzer IV was not originally intended to engage enemy armor that function was performed by the lighter Panzer III. However, with the flaws of pre-war doctrine becoming apparent and in the face of Soviet T-34 tanks, the Panzer IV soon assumed the tank-fighting role of its increasingly obsolete cousin. Robust and reliable, the Panzer IV saw service in all combat theaters involving Germany and has the distinction of being the only German tank to remain in continuous production throughout the war, with over 8,800 produced between 1936 and 1945. Upgrades and design modifications, often made in response to the appearance of new Allied tanks, extended its service life. Generally, these involved increasing the Panzer IVs armor protection or upgrading its weapons, although during the last months of the war, with Germanys pressing need for rapid replacement of losses, design changes also included retrograde measures to simplify and speed up the manufacturing process. The Panzer IV was the most widely exported tank in German service, with around 300 sold to partners such as Finland, Romania, Spain and Bulgaria during the war. This model kit depicts a mid or late war version of the Panzer IV tank. With this kit, you can assemble it to present an Ausf F2, G, or H variant. It comes with 3 gun and 2 mantlet choices, together with detachable turret and side armour skirts (Schürzen).Number of Parts: 50 pieces / 3 sprues