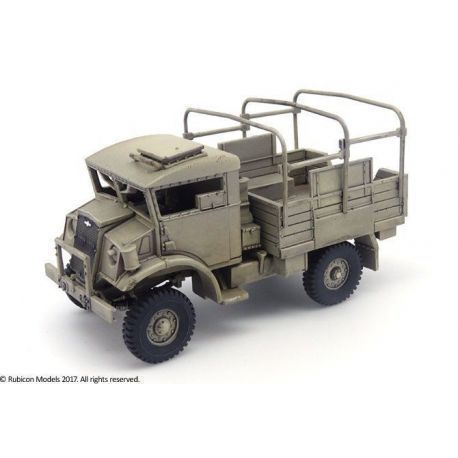 The Canadian Military Pattern (CMP) truck was a class of military truck - of various forms - made in large numbers in Canada during WW2 to British Army specifications for use in the armies of the British Commonwealth allies.

Standard designs were drawn up just before the beginning of the war. CMP trucks were also sent to the Soviet Union following the German invasion, as part of Canada's Gift and Mutual Aid program to the Allies. During the war, CMP trucks saw service around the world in the North African Campaign, the Allied invasion of Sicily, the Italian Campaign, the Soviet Front, the Burma Campaign, the Battle of the Philippines (194142), the liberation of Northwest Europe, and the Western Allied invasion of Germany. CMP trucks also saw service in post-war conflicts in Indonesia, French Indochina, and the Portuguese colonies in Africa. Most CMP trucks were manufactured by the Chevrolet division of General Motors of Canada Ltd and by the Ford Motor Company of Canada. The vehicle manufacturers were able to rapidly ramp up their production because of an unusual degree of inter-company collaboration in Canada, the use of interchangeable parts, and because of the large amount of idle production capacity that was a lingering result of the Great Depression. A smaller number of CMP trucks were assembled from Canadian-made chassis and parts in Britain, Australia, New Zealand, South Africa (2,600), India (9,500) and Egypt. Following British convention, CMP trucks had right-hand drive even though most of them were built in Canada, which primarily used left-hand drive vehicles. The CMP specification proved versatile, and it formed the basis of a wide variety of different truck types and armoured vehicles. In Australian service (almost always with the No. 13 cab) these vehicles were known as the Chev Blitz or the Ford Blitz. Just over 500,000 CMP trucks were manufactured in Canada. Product Highlights: - Choice to build a CMP with or without tarpaulin - Choice of open or closed rear canvas cover - One piece cab assembly for ease-of-assembly - Open or closed cab hatch - Crew figures with choice of head & hand options included