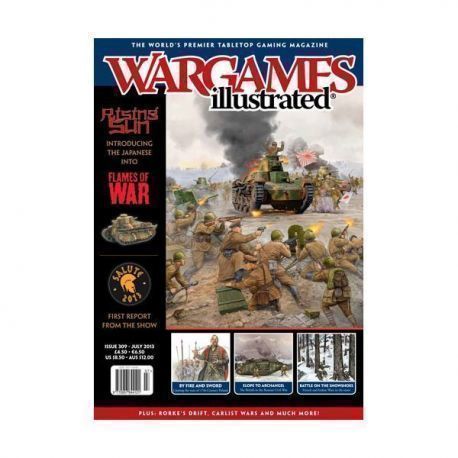 THE RAISING OF THE RISING GUN
One of the challenges of creating the new Rising Sun handbook for Flames Of War was introducing a new nationality to the rules. This meant a little more work and testing for the rules writers to create a new batch of national special rules for them. When doing this they had to also consider how these rules would be used when the game moved into the Pacific and Southeast Asia, so an element of future-proofing had to be considered. In this article Battlefront writer Wayne Turner discusses his work on introducing the Japanese nation special rules into Flames Of War.

RISING TONS
A look at the development of Japanese tanks between 1919 and 1939.

THE NOMONHAN INCIDENT
Two members of the Battlefront Studio team test drive the new Rising Sun Intelligence Handbook, with a battle report on their refight of this battle between Soviets and Japanese.

WHEN RUSSIAN TANKS LED THE WORLD
In 1939 the Red Army possessed the most powerful tank force in the world. In this article Phil Yates examines its development during the early years of World War Two.

SAN TARZGAROTTO
We are guided through the creation of this wonderful (if fictional) Carlist Wars battle by Chris Thompson, one of the men behind the masterpiece. Chris tells us how the table was created, and what prompted the “what if” scenario.

BY FIRE AND SWORD
The authors of this new pike & shot-era game were eager to let us know a little bit more about how it represents the fighting that took place in and around the Polish Commonwealth in the late 17th Century.

THE BATTLE ON SNOWSHOES, 1758
As wargamers it often doesn’t take much to spark our interest in a period or battle. A throw away line he heard in the film Northwest Passage led Nick Buxey (40 years later) to research and construct a game around the French and Indian Wars Battle on Snowshoes.

ELOPE TO ARCHANGEL
Stephen Crighton presents his findings on the British involvement in the Russian Civil War, and offers up a number of gaming ideas that pit the men of the North Russia Relief Force against the Bolsheviks.

PHOTOGRAPHING: RORKE's DRIFT, 1879.
In the second part of his Zulu Wars photo expose, Pat Smith takes us through the almost hopeless defence of the British outpost at Rorke’s Drift. Like our presentation of his iSandlwana set-up, the story is retold in Pat’s research and wonderful photography.