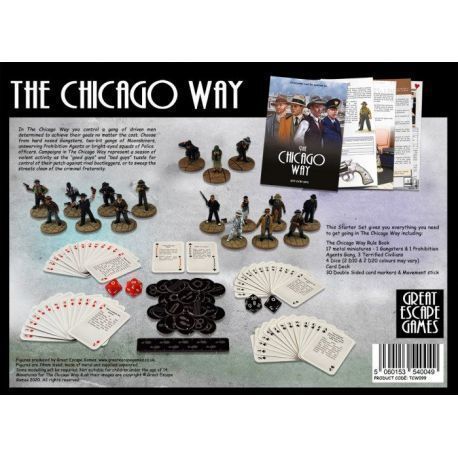 With an accompanying range of 28mm miniatures, vehicles and pre-painted buildings, players can gun down the opposition as they vie for control of the city. The Chicago Way rule book provides all the rules to play, four competing factions and a campaign system in which your characters gain skills and your boss exerts his influence over his rivals. Inside the box is a rulebook with card deck and markers, campaign map, Prohibition Agents and Gangster gangs (each gang is 7 metal miniatures with bases), dice and a set of civilian metal figures (Terrified Civilians TCW022). Limited Edition: once sold out this box set will not be available. In The Chicago Way you control a gang of driven men determined to achieve their goals no matter the cost. Choose from hard nosed Gangsters, two-bit gangs of Moonshiners, unswerving Prohibition Agents or bright eyed squads of Police officers. Campaigns in The Chicago Way represent a season of violent activity as the "good guys" and the "bad guys" tussle for control of their patch against rival bootleggers, or to sweep the streets of the criminal fraternity. The 44 page full colour Chicago Way rule book comes with the TCW card deck consisting of 54 cards, an A5 punchboard of game markers, and a full colour A3 campaign map.